by PR Assistant, in Art, Behind the Scenes, Support

As part of the Museum’s commitment to preserve the permanent collection for future generations, conservation needs are assessed annually. Thanks to a donation from Jim and Joan Van Vleck, the Museum was able to undertake an assessment of the painting collection, treatment of four works, as well as the restoration of the English Garden’s center mosaic fountain by the the Museum’s object conservator.

While at the Museum in May, Rustin Levenson, the painting conservator, did a variety of work including evaluating environmental controls, measuring light levels, assessing paintings in the Museum’s collection, and treating those requiring immediate attention. This type of detailed assessment is vital to the Museum as it plans for the future, prioritizes funding, and communicates with donors. Along the Strand, the first painting acquired by Mrs. Cummer, was transported to Levenson’s studio for treatment to address its discolored varnish, surface grime, and abrasions. The Kitchen at Mount Vernon had an area of lifting paint and evidence of cleaning damage to original glazes from a previous restoration, both of which were worked on during its treatment. 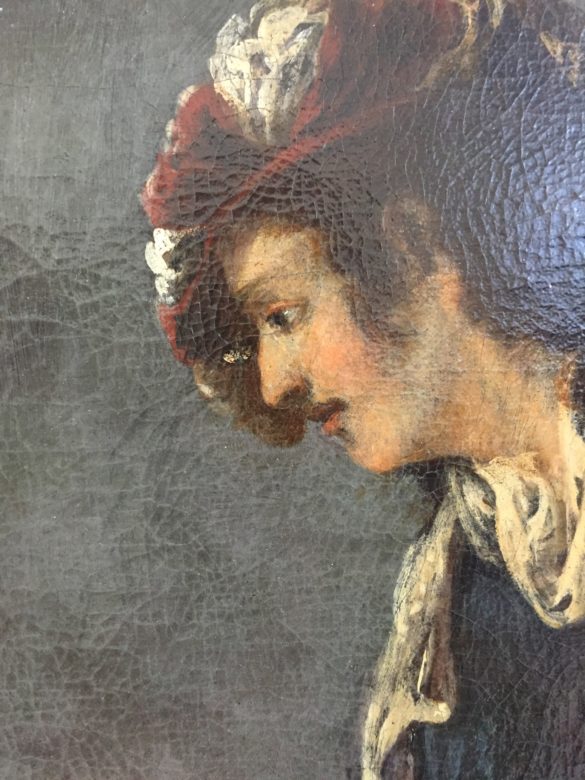 David Called from His Flock required extensive treatment due to paint chipping and loss. In addition, this painting’s frame dates to the early 1800s and will be restored to its original beauty by a frame restorer, who was also involved in the conservation repairs. A fourth painting, Robert Henri’s Guide to Croaghan (Brien O’Malley), was determined to need further conservation, and many more works were identified as candidates for future conservation projects.

Levenson didn’t just carry out the act of conservation; she also spoke to the Board of Trustees about what conservation is and why it is important. Conservation is, and always will be, an ongoing project. There will always be a list of pieces that would benefit from treatment, which is only made possible by generous donors.